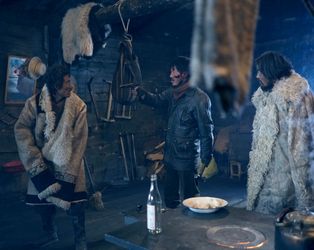 Jigme Trinley’s debut feature co-produced by his father, Tibetan writer, producer and director Pema Tseden, and based on a novel by Jamyang Tsering, is a fun, stylish, psychological western-thriller-fable sets in the late 1990s.

Forest ranger Sanggye (Jinpa) is isolated, confused, starving and hungover after a night of drinking with Kunbo, a friend and neighbour from Sanggye’s village who came visit. The next day, sitting alone in his wooden cabin, he writes in the forest patrol journal. With a blizzard fast approaching, he is visited one after another by three duplicitous men, each with their own stories: an injured forestry police officer carrying a rifle and claiming to chase a poacher; Kunbo back again, bringing information about his wife; and another man also claiming to be a policeman. Caught in a complicated ‘huis clos’ of double-crossing and mistaken identities, tension, suspicion and paranoia escalate through the mesmerising photography by DOP Lu Songye, and the wonderful soundscape by Ding Ke in One and Four.

The screening will be introduced by Irish writer, filmmaker and producer Paul Duane.