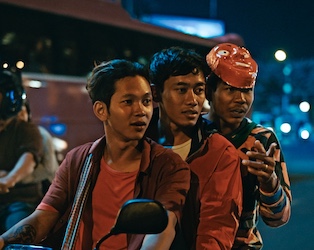 The White Building is a decaying, state-owned apartment building which stands in the heart of Phnom Penh, where Samnang (Piseth Chhun) and his parents have lived all their lives. In the face of imminent demolition, the family, along with friends and neighbours are forced to leave, as the area is redeveloped, part of a ‘transformation plan’ for the city.

Homegrown Cambodian director Kavich Neang draws on his personal history to talk about a city being transformed, a community displaced as a result of globalisation. The film addresses spiritual gaps, and cultural tensions between an older generation traumatised by the past, and the young Cambodian population looking toward the future with ambition and hope.