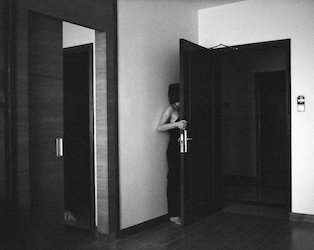 Chinese director Zheng Lu Xinyuan (The Cloud in her Room, EAFFI 2021) experiments with fragmented form and narrative. Shot in the midst of lockdown she combines family stories with moments of travel and displacement across continents in this personal cinematic essay shot on video in black and white. Her unique eye captures strong poetic and texturally rich images and isolated fragments of time, slowly inducing a palpable sensation of being displaced and in a state of flux.

‘Spring 2018, Grandma and our family were invited to Mandalay to attend a distant relative’s wedding. In between the banquet and sightseeing, Grandma was eager to find out more about her missing father, who left China when she was five, becoming a Monk in later life. After multiple flight cancellations, my girlfriend Zoe and I made our way back home. We visited Grandma together. I came to realise that Grandma, Zoe and I were all experiencing an absence of fatherhood for different reasons. In February 2021, a military coup took place in Myanmar. All of a sudden, Myanmar again became a place that is so close and at the same time so far away.’ – Zheng Lu Xinyuan

The screening will be introduced by Alice Butler and Daniel Fitzpatrick, co-directors of aemi, an Arts Council-funded organisation that supports and regularly exhibits moving image work by artists and experimental filmmakers, www.aemi.ie