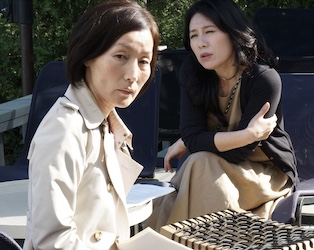 Sangok (superb Lee Hye-young), a middle-aged former actress who has lived in the United States for some time and has just arrived in Seoul, is staying with her sister. We follow her through 24 hours – waking up after a pleasant dream she goes for coffee and toast with her sister; later she meets a director who saw her in a film in the early 90s and wants to make a new project with her…

Narrative, dialogue, and characters pivot magically in this brilliant character study by South Korean director Hong Sang-soo, a festival favourite. Contemplative, graceful, and often quite hilarious, the closer we zoom in on Sangok’s life, the blurrier she appears, as we are left uncertain what to believe about her.