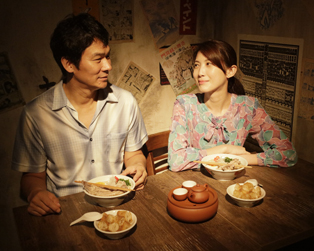 The latest film from Singapore’s award-winning director Eric Khoo is a family saga with good food! Popular actor-director Takumi Saito perfectly captures the natural warmth and emotional depth of young Ramen noodle chef Masato. Following the sudden death of his father, Masato leaves his hometown in Japan to embark on a journey to Singapore in search of food recipes, but also on a quest to uncover his mother’s roots. Finding his uncle and grandmother, he discovers his late mother’s family secrets and the truth about his past. Khoo (asked to make a film in celebration of 50 years of diplomatic relations between Singapore and Japan) skillfully interweaves culinary artistry with themes of forgiveness, family reconciliation and cruel memories of the Japanese occupation of Singapore during World War II.