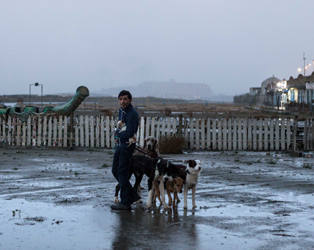 Matteo Garrone (Gomorrah, 2008) creates a brilliantly realised milieu of corruption and decay in the relentlessly gripping and flawlessly acted Dogman.

Mild-mannered Marcello (Marcello Fonte) operates a dog-grooming parlour on the outskirts of a bleak, depressed Italian seaside town. His clients are predominantly petty crooks, yet the physically slight man is surprisingly adept at handling their vicious pets. No innocent, Marcello deals drugs on the side, which has made him a popular fixture in the community and helps pay for the extravagant holidays he brings his doting daughter on. He has, unfortunately, become embroiled in a toxic, co-dependent friendship of sorts with Simoncino (Edoardo Pesce), a violently unpredictable local thug.