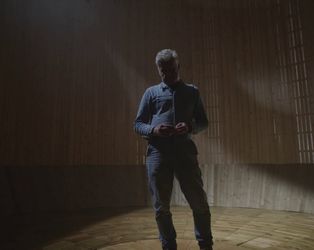 When Glaswegian performance artist, Stephen Skrynka, learns that a life-long obsession with building and riding a ‘Wall of Death’ was shared with Michael Donohoe and Connie Kiernan (who built a wall in 1979 and inspired the film Eat the Peach), he heads to their farm in Granard, Co. Longford with an audacious proposal: construct a new ‘Wall of Death’ with him and take it on tour.

Though the Wall is painstakingly constructed, a painful argument between the trio brings the endeavour skidding to a halt. Devastated, Stephen returns to Glasgow to lick his wounds, emerging mid-pandemic to fight another day. This captivating yarn explores the relentless determination of an artist to realise his dream.

This screening will be followed by a Q&A with director Maurice O’Brien, producer John Kelleher and producer Grant Keir.