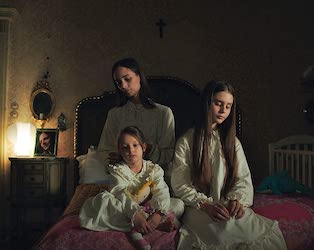 Stella, a seventeen-year-old girl, lives with her father and two younger sisters, Luce and Aria, in a house in an isolated area, with heavy wooden barred windows. Her father is the only one who is able to go outside, because outside all is apocalyptical. But something about the father’s and Stella’s story doesn’t quite add up. Darkness is a film about girls who question the stories they’ve been told. It’s also a film made before the pandemic that eerily captures the experience of being confined to the home, of anxiety when venturing outside, and of everyday life changing completely.