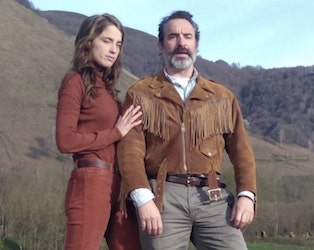 Georges (Jean Dujardin) appears to be experiencing a midlife crisis; he has just spent the last of his money to acquire the object of his fascination – a vintage, made-in-Italy, 100% deerskin jacket – purchased from an aging hippie who throws a camcorder into the bargain. Inspired by the heroic nature of velvety garment, Georges casts off the shackles of his old life to embrace a newfound freedom, reinventing himself as an archetypical brooding macho loner. Taking up residence in a remote country hotel, the now penniless George declares himself a filmmaker, and begins documenting life with his camcorder. He befriends local waitress and aspiring film editor Denise (Adèle Haenel), whose enthusiasm forces George to make good on his boast that he is shooting a film in the area. George’s love for his jacket, however, and the ‘killer style’ it imparts, soon warps into violent obsession.