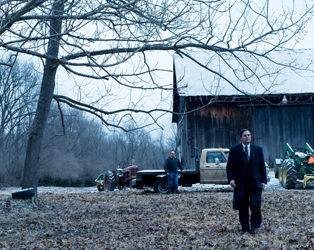 This film was released on the 28th of February 2020, and is no longer screening.

In the late 1990s Robert Bilott (a solid performance from producer Mark Ruffalo) is about to be made a partner at his law firm where he defends chemical companies. When cattle farmer Wilbur Tennant (a powerful and emotional turn by Bill Camp) contacts him with chilling details about the effects that chemical waste from the nearby DuPont factory has had on his livestock, Bilott reluctantly agrees to look into it. In a career-upending move, Bilott uncovers details about the chemical PFOA (used during Teflon production) which has polluted groundwater and the worrying implications for local residents. Based on a true story and directed by Todd Haynes (Carol, I’m Not There), with a strong supporting cast featuring Anne Hathaway, Tim Robbins and Bill Pullman, Dark Waters is a moody and slow-burning drama which will leave you feeling rightfully enraged.