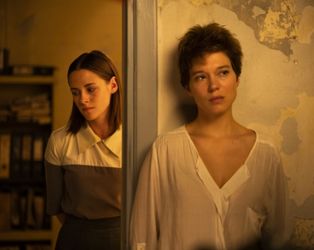 In the future, Accelerated Evolution Syndrome sees the human body evolve in ways that confound science; new organs, whose function remains obscure, are sprouting in bodies spontaneously, and pain has become a thing of the past. Performance artist Saul Tenser (Viggo Mortensen) extracts his specially cultivated novel organs in theatrical public displays, operated upon by his assistant and partner, Caprice (Lea Seydoux). While some embrace the limitless potential of transhumanism, others, such as Timlin (Kristen Stewart) from the National Organ Register, attempt to police it. Crimes of the Future sees director David Cronenberg return to body horror, the genre he practically invented, after twenty plus years of relatively conventional dramatic films. Rich in metaphor, intellectually stimulating, and presented in his signature clinical style, the film encapsulates themes which have long preoccupied the director, whilst offering proof of his continued vitality.