Sisters Maria (Liv Ullmann) and Karin (Ingrid Thulin) have returned to their family’s rural home to tend to their dying sibling Agnes (Harriet Andersson). Waiting for the inevitable, the sisters’ chilly reserve and lack of connection are thrown into sharp relief by the honest, unconditional love the family housemaid Anna (Kari Sylwan) lavishes upon Agnes. Troubling memories and long-repressed feelings rise to the surface in a series of sensual and metaphorical vignettes. Filmed in saturated colours, Cries and Whispers is a profound examination of the human soul, its startling reds and whites as ravishing and chilling as the dramas they animate. Featuring outstanding performances, and stunning cinematography by Sven Nykvist, Bergman’s magnificently unconventional chamber piece, re-released now on the occasion of its 50th anniversary, has lost none of its power. 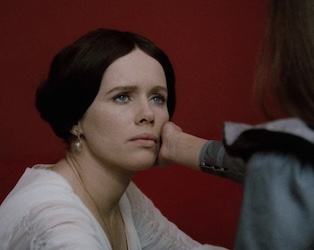