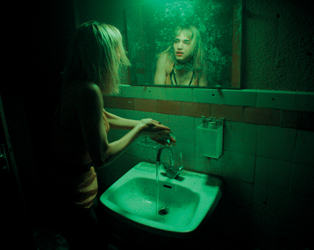 The latest provocation from Gaspar Noé (Irreversible, Enter the Void) defies categorisation as the director plunges his audiences once again into a roiling, red-hued inferno of sex, drugs and violence, allegedly based on real events.

A contemporary dance troupe is engaged in rehearsals and, save for an opening preamble where they are introduced via audition videos, Climax is set entirely within the confines of their studio. Two extended kinetic dance pieces are performed before the striking credit sequence occurs, counter-intuitively, some forty minutes into the film. The dancers take a break, the sangria comes out, and flirtations take on a dangerous edge; something is not right, the drinks have been spiked with LSD, and soon everyone is hurtling headlong into a personal psychedelic nightmare freak-out.