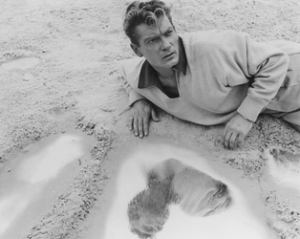 The Classics Now festival, which celebrates the artistic achievements of the ancient Greek and Roman civilisations through modern reinterpretation, returns to the IFI with this screening of poet, playwright, artist, and filmmaker Jean Cocteau’s transposition of the Greek myth of Orpheus to 1950s Paris. Orphée (Jean Marais), a celebrated poet, is transported by a mysterious Princess (María Casares) to the Underworld. Chauffeured back to the realm of the living, he becomes obsessed with cryptic radio broadcasts, ignoring his wife Eurydice (Marie Déa), and failing to notice that his otherworldly driver has fallen in love with her, even as he himself has fallen in love with the Princess, an avatar of Death. Thematically complex and visually inventive, Orphée saw Cocteau at the height of his powers as a filmmaker, and it remains a beautiful, touching, and often surreal fable.

The screening will be introduced by Sinéad Mac Aodha, Director of Literature Ireland.

Screening as part of the Classics Now festival. More info on the festival is available on their website – www.classicsnow.ie