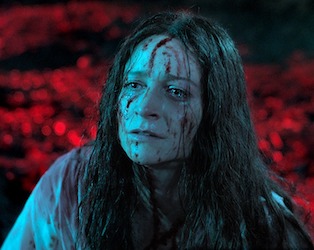 Thatcher’s Britain was swept by a wave of moral panic at the supposed corrupting influence of ‘video nasties’, stoked largely by the tabloids and figures such as Mary Whitehouse. Censor Enid (Niamh Algar), prim to the point of austerity, is one of those tasked with protecting the public, seeing her work as a solemn duty. The stress of a film she passes being cited as the influence for a copycat murder amplifies her ongoing obsession with the childhood disappearance of her sister, who she now believes features in some of the more extreme work she must view. Algar’s outstanding depiction of a repressed woman fraying beyond redemption is but one highlight of this luridly-lit film, reminiscent of Peter Strickland’s Berberian Sound Studio (2012) and Rose Glass’s Saint Maud (2019), and featuring a louche, reptilian cameo from the always-welcome Michael Smiley.