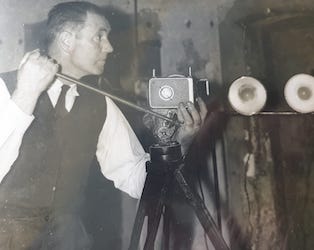 Camera Tripod Bicycle celebrates the work of Dubliner and fireman Leslie Crowe who spent 25 years filming his city and  family on his 8mm Brownie camera .

This new RTÉ documentary, directed by Nuala O’Connor (Keepers of the Flame), explores Leslie’s collection of beautifully composed drama and documentary films.  Shot between the late 1950s and the late 1970s the films document the everyday life of a city undergoing radical modernisation: the demolition of the old city and the development of semi-rural villages into the suburbs of Coolock, Raheny and Santry.

A short ceremony marking the deposit of The Leslie Crowe Collection in the IFI Irish Film Archive will follow the screening.