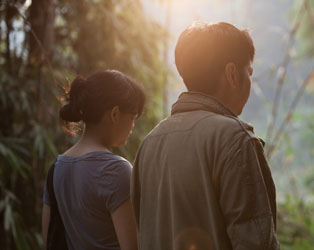 This film was released on Friday 16th June 2017 and is no longer screening.

The follow up to 2009’s Mundane History, the beguiling, utterly original and shape-shifting By The Time It Gets Dark has received critical acclaim and a number of international awards since its premiere at Locarno. Initially the film follows two characters, a writer-director called Ann (Visra Vichit-Vadakan) and Taew (Rassami Paoluengton), a survivor of the devastating Thammasat student massacre of 1976 and the subject of Ann’s new film.

Following a crisis of conscience that Ann experiences while walking in a forest however, the film departs, and not for the only time, for pastures new, turning its attention to a different but not entirely unrelated set of characters and concerns. A meaningful constant throughout is Achtara Suwan who turns up in a number of roles, embodying a character who carries out menial work but who possesses a kind of dignity and wisdom that pervades this film as a whole.