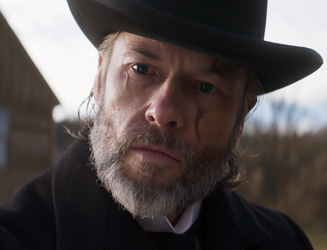 This film was released on Friday 6th October 2017 and is no longer screening.

Mute midwife Liz (Dakota Fanning) is stricken with terror at the arrival of a charismatic new preacher (Guy Pearce) to the small community in which she lives with her husband and children in the old American West. Her unexplained fear is justified when the preacher, a man of seemingly unbridled malevolence, targets her and her family.

Across a series of chapters, the link between the two is outlined as writer-director Martin Koolhoven fills in the details of Liz’s life story before the two meet for a final confrontation. Filled with striking imagery, the film often makes for bleak, even harrowing viewing, but is carried magnificently by its two leads. Dakota Fanning conveys the strength of Liz, a true survivor, through her expressive physicality, while Guy Pearce exudes implacable menace, with a Bible verse to forgive every sin, no matter how great.