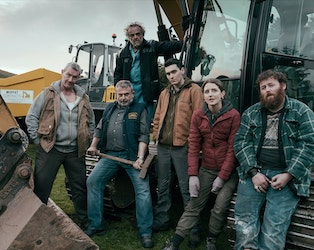 In the backwater town of Six Mile Hill, local lads Eugene and William scam hapless tourists visiting the burial place of Abhartach, a blood-thirsty vampire said to have inspired the creation of Bram Stoker’s Dracula. Eugene’s relations with his father Francie are fraught, but he and friend Claire, are resigned to working on Francie’s construction crew which, unbeknownst to the superstitious locals, is due to build upon Abhartach’s cairn. When William confesses that he’s had enough and is off to Australia a drunken row ensues, ending in tragedy and the unleashing of sinister forces from the cairn.

Chris Baugh’s film carries all the bloody trademarks of classic horror, but the gore is cut with comedy and complex characters dealing with real-life issues, to deliver a fresh and distinctly Irish take on the genre.