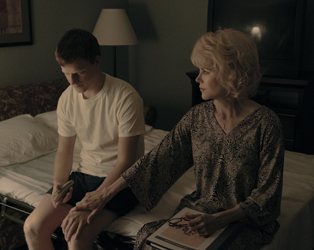 This film was released on Friday 8th February 2019 and is no longer screening.

A young man endures a prolonged retreat in a gay conversion therapy centre in Joel Edgerton’s empathetic second feature, a successful change of pace for the actor-director following his thriller debut, The Gift (2015). When Arkansas teenager Jared (Lucas Hedges) confesses uncertainty about his sexual orientation, Marshall (Russell Crowe), his Baptist pastor father, and Nancy (Nicole Kidman), his devoutly religious mother, are shocked and saddened. Jared is sent to ‘Love in Action’, a conversion camp run by Victor (Edgerton), who misguidedly believes he can cure gay teens of their ‘affliction’. Initially willing to be ‘healed’, Jared begins to question Victor’s motives as the ignorance and bigotry of the camp’s practices are gradually revealed.