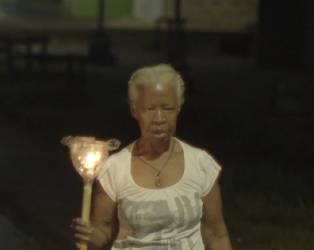 Bojayá: Caught In The Crossfire follows the story of LeynerPalacios, a community leader and Nobel peace prize nominee, who lost 32 relatives in one massacre.

The 2002 Bojayá massacre was and remains, one of the worst mass atrocities in Colombia’s 50 year-long conflict. The victims were never to be properly identified. As a result, Leyner decided to become a lawyer to fight for his people’s rights.

Through capturing Leyner’s obstacle-filled quest in real time, a fascinating perspective emerges on an unfolding history in Colombia. Is Leyner’s value merely symbolic, or can this poster-boy for peace make a difference? Is the violence in Colombia cyclical and intractable, or can it be changed by listening to the voices of the victims?