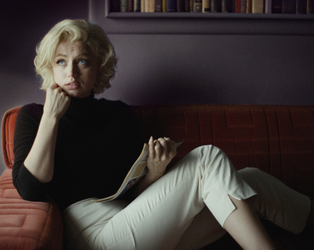 Andrew Dominik’s oft-delayed adaptation of Joyce Carol Oates’s novel, a fictionalised account of the life of Marilyn Monroe (Ana de Armas), arrives cresting a wave of anticipation and controversy. Focusing on a series of abusive relationships the legendary actress endured, beginning with her mentally unstable mother, the film, as per the source novel, steers clear of naming its characters, with Bobby Cannavale playing ‘the ex-athlete’ Joe DiMaggio, while Adrien Brody is ‘the playwright’ Arthur Miller, and Casper Phillipson appears as ‘The President’, JFK. Anchored by a truly exceptional performance by de Armas, Blonde tells the story of how childhood trauma shapes an adult who’s split between a public and private self. Veering from fairy-tale to surreal nightmare, in black and white and colour, with a variety of frame ratios, Blonde is destined to be one of the year’s best films.