Blarney features well-loved comedian Jimmy O’Dea as hapless cough-medicine salesman who plies his trade along the Irish Border. He runs into trouble when he crosses paths with a pair of jewel thieves. High jinks ensue and cross-border rivalry for the affections of a local girl brews between a southern Garda (Noel Purcell) and a Northern RUC man. The film was shot in the villages of Carlingford and Greenore.

On the centenary of the enactment of partition in May 1921, modern audiences may be surprised by Blarney’s naivete and the stoic acceptance of the border’s existence. Does the film reflect prevailing political beliefs or is it simply the whimsical production of a creative mind?

Enjoy Blarney on the big screen and marvel at the meticulous digital restoration by the IFI Irish Film Archive supported by The MEDIA sub-programme of Creative Europe. 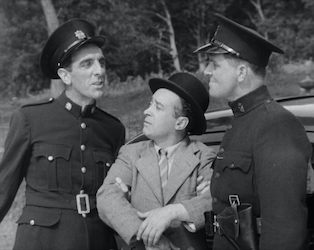