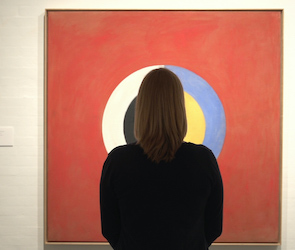 Hilma af Klint (1862–1944) was an abstract artist before the term existed: a visionary, trailblazing artist inspired by spiritualism, modern science and the riches of the natural world.

Beyond the Visible is the first film about Klint’s life and work, chronicling her pioneering artistic practice and mystical view of the world, from the beginning of her career at Stockholm’s Royal Swedish Academy of Fine Arts, to her involvement in Theosophy, spiritualist and occult movements, including joining “The Five”, a group of female artists who conducted séances which lead to experiments with automatic writing and drawing, pre-dating the Surrealists by several decades.