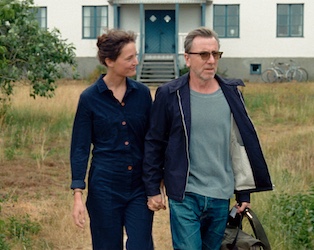 Chris and Anthony (Vicky Krieps and Tim Roth), a couple, and both filmmakers, are spending a summer on the Swedish island of Fårö, famous for its association with Ingmar Bergman, where the director had a house and found much of his inspiration. They too hope the island’s beautiful yet unforgiving and wild landscape, where Bergman shot many of his most celebrated films, will nourish their creativity as they embark on separate projects. They will sleep in the actual bedroom from Scenes from a Marriage, ‘the film that caused millions to divorce’, as their guide quips. Anthony’s work is fêted at their artist residency, while Chris struggles with her screenplay-in-progress, which is shown to us as a film-within-a-film. In it, Mia Wasikowska plays Amy, a young director who reunites with a long-estranged first love, Joseph (Anders Danielsen Lie), at a wedding on the island of Fårö.