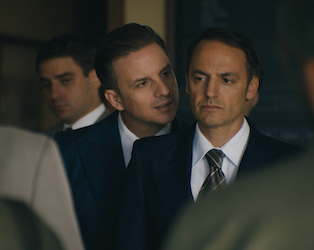 Argentina, the late 1970s. Private banker Yvan (Fabrizio Rongione) has arrived from Geneva to replace a colleague who has mysteriously disappeared and to placate their moneyed clientele in Buenos Aires. Moving through the smoke-filled lounges and lush gardens of a society under intense surveillance, he finds himself untangling a sinister web of colonialism, high finance, and a nation’s ‘Dirty War’. A remarkably assured debut from Andreas Fontana, Azor invites us into the alluring world of the ultra-wealthy; with the country in the clutches of a military dictatorship, violence is always simmering just below the surface. Atmospheric and slyly seductive, this sophisticated political thriller teems with exquisite scenery and ominous conversation. A highlight from this year’s Berlin Film Festival, Azor evocatively depicts the uneasy interplay between wealth and power.