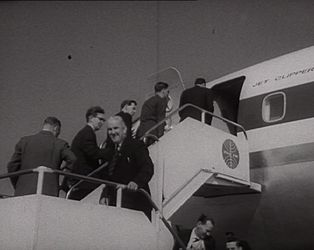 Join us for free screenings of films from the IFI Irish Film Archive every Monday, Wednesday and double-bill Saturday. Simply collect tickets at the IFI Box Office.

Marvel at inaugural flights to Malaga and New York. New jet airlines, air hostess training and the arrival of stars!

Aer Lingus planes named after great Irish missionaries are blessed annually by members of the clergy and carry us safely to destinations all over the world.

Sponsored by Aer Lingus and produced by Vincent Corcoran, this film shows the company’s operations in Ireland and overseas. The film looks behind the scenes at Dublin Airport and at the expertise involved in developing and maintaining Ireland’s national airline.