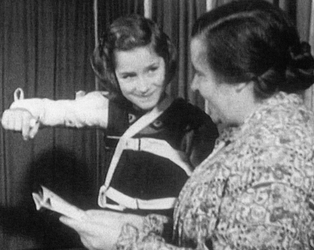 Join us for free lunchtime screenings of films from the IFI Irish Film Archive on Mondays, Wednesdays and Saturdays. Simply collect your tickets at the IFI Box Office. Please check the date buttons at the top of the page for times.

This month, we present road safety gems from an impressive line-up of Irish directorial talent.

This filmlet highlights the dangers of the road, particularly for children who may expect a visit from the Grim Reaper if they don’t look where they’re going.
Directed by William Moylan.

Sinéad Cusack and Des Cave star in this dramatised road safety film about a young couple whose dreams are dashed following a motorbike accident.
Directed by George Morrison.

Maureen Potter talks road safety to children in
the suburbs of Dublin and in the Road Traffic School
in Fairview. Directed by Louis Marcus.