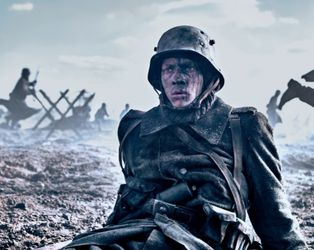 Germany, 1917: 17-year-old Paul (Felix Kammerer) enlists in the army with his friends, young men filled with romantic dreams of glory on the battlefield, who are plunged into the unremitting horror of trench warfare. Edward Berger’s adaptation of Erich Maria Remarque’s 1928 novel crosscuts from the relentless slaughter on the front lines to the efforts of Erzberger (Daniel Brühl), a liberal politician, to negotiate peace with France against the wishes of a vainglorious military, personified by General Friedrich, who would continue to dispatch countless numbers of young men to certain death. The armistice will be on French terms, and Erzberger is given 72 hours to sign, enough time for Friedrich to send Paul on another fruitless sally. Berger hammers home the futility of the war – and by extension all conflicts – with a series of terrifyingly realistic battle sequences in which the entrenched sides fight for mere metres of land.