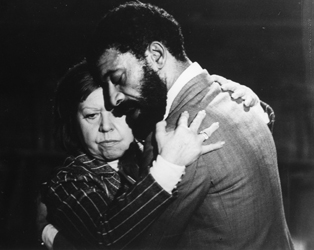 In Rainer Werner Fassbinder’s remarkably prolific career, in which he made forty feature films before his death at thirty-seven, Ali: Fear Eats the Soul marked a significant turning point. It was the film for which the director first received widespread international praise, winning two awards at Cannes including the coveted Critics’ Prize.

All the more impressive then that the film was made on a meagre budget in fifteen days, intended as an exercise for Fassbinder to test ideas between the making of Martha and Effi Briest (both also 1974). Inspired by Germanborn director Douglas Sirk’s Hollywood melodramas, particularly All That Heaven Allows (1955), Ali: Fear Eats the Soul depicts the tender but much derided relationship that develops between Emmi, an elderly German cleaning lady (Brigitte Mira) and Ali, a considerably younger Moroccan ‘guest worker’ (El Hedi ben Salem) whom she meets at a rundown Munich bar one rainy night.