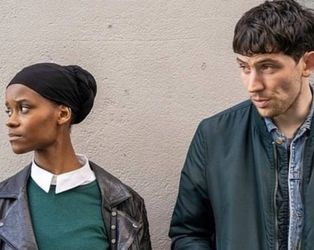 Aisha (Letitia Wright) lives at a Direct Provision Centre in a state of uncertainty; having fled Nigeria from a violent gang that murdered members of her family, she is desperately trying to find some degree of permanency, where she and her mother can be reunited and live without fear. As she navigates the complex legal system to seek settlement in Ireland, she sparks an unlikely friendship with Conor (Josh O’Connor), a new guard at the centre. A former prisoner, Conor’s life experience and calming presence resonate with Aisha, allowing for a tentative romance to begin. But, as she continues to live in a state of limbo, the bond formed between the pair comes under threat.

The product of director Frank Berry’s typically extensive research, Aisha is a powerful critique of a bureaucratic system which compounds the trauma of those seeking refuge.