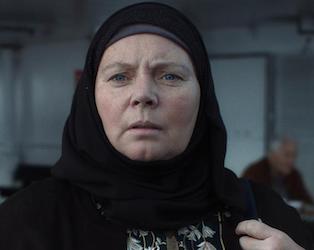 Mary Hussain (Joanna Scanlan), who converted to Islam when she married and is now in her early sixties, lives quietly with her husband Ahmed. Following his unexpected death, she suddenly finds herself a widow. A day after the burial, she discovers that Ahmed had a secret life just twenty-one miles away from their Dover home, across the Channel in Calais. The shocking discovery compels her to go there to find out more and, as she grapples with her shattered sense of identity, her search for understanding has surprising consequences. Featuring a phenomenal performance by Scanlan, who was awarded the Best Actress Award by the Dublin Film Critics Circle at the Virgin Media Dublin International Film Festival, After Love is a highly accomplished debut from writer and director Aleem Khan.