“I thought we were making a comedy” drawled Jack Nicholson when accepting his Golden Globe Award for this film as Best Actor in a Drama. About Schmidt is often very funny, particularly when Nicholson responds over-enthusiastically to an acquaintance’s sensitivity to his apparent sadness; or in the ghastly dinner he shares with his future in-laws, led by an alarmingly liberated Kathy Bates. At its heart, though, is the situation of a recently retired widower mentally re-evaluating his past as he drives to the wedding of his beloved daughter (a radiant Hope Davis) and wonders whether, after all, his life has been a failure. This is one of Nicholson’s greatest character performances: deadpan, restrained, but with every expression and movement perfectly inflected and timed. And the ending is a knockout, even by Payne’s standards. It may be the sentimental indulgence of a lonely man, but it feels more like a tender moment of redemption in an unfulfilled life: either way, dramatically satisfying, emotionally overwhelming. (Notes by Neil Sinyard.) 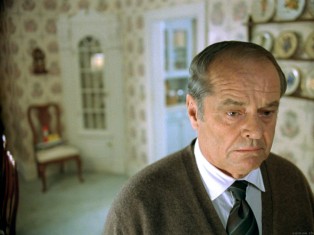