It is summer 2011 in Tunisia, and wealthy couple Fares (Sami Bouajila) and Meriem (Najla Ben Abdallah) are holidaying in the south of the country with their son Aziz. Accidentally caught up in an ambush, their car gets hit and Aziz is shot. At the local hospital in need of a liver transplant, a long-concealed family secret is unearthed. Tunisian director Mehdi Barsaoui’s first feature is a tense, sensitive and troubling drama set to the backdrop of political and social upheaval, just months after the fall of Ben Ali and weeks before that of Gaddafi in Libya. The story brings questions of masculinity, paternity, the place of women, and trafficking of human organs to the fore. Haunting music from Amine Bouhafa and elliptical narrative structures combine to slowly reveal the family’s unspoken past. 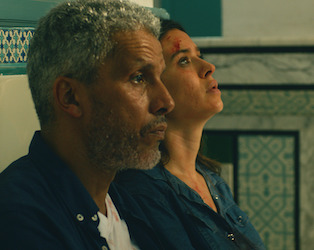