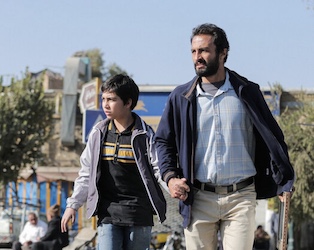 No good deed goes unpunished in the latest drama from Asghar Farhadi (A Separation), co-winner of this year’s Cannes Grand Prix, which again sees the master Iranian director place his protagonist in the knottiest of moral and ethical dilemmas. Rahim (Amir Jadidi), a calligrapher, was imprisoned when bankruptcy forced him to default on a loan to his former father-in-law, Braham (Mohsen Tanabandeh); back in the city of Shiraz on a two-day leave, Rahim hopes to pay the money back, get his life back on track and regain a modicum of dignity. His girlfriend, Farkhondeh (Sahar Goldoust), has a plan to sell some gold coins found in a handbag; disappointed by the price of gold, Rahim switches gears, and resolves to find the owner of the lost bag, who eventually comes forward, an act that inadvertently posits him as a hero in the eyes of the media, and exposes his story to intense scrutiny.