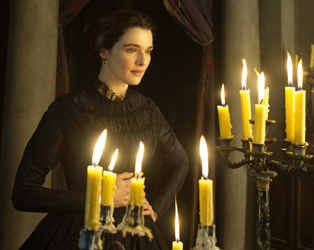 In this absorbing and brilliantly open-ended new adaptation of Daphne du Maurier’s 1951 novel, Rachel Weisz takes on the eponymous role, playing opposite Sam Claflin as Philip, once a young orphan, brought up by his older, beloved cousin Ambrose who travels to Italy for respite where he meets and falls in love with his cousin Rachel. Once married however, their relationship appears to sour and when Philip learns Ambrose is unwell, he goes to Italy only to discover his cousin has died.  Determined to exact revenge on Rachel, who he believes is responsible for Ambrose’s demise, Philip instead becomes infatuated with her when she arrives at the Cornwall estate, which, it transpires, her husband has bequeathed to Philip instead of his wife.

Enjoy a main course inspired by the film following the screening on Wednesday 21st at 18.30.