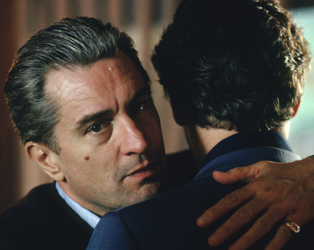 *Tickets for this event have sold out- it is also screening daily from the 20th of January. Tickets here *

This month’s pairing of a film screening followed by a specially devised main course is Martin Scorsese’s gangster classic Goodfellas.

Regularly cited as one of the greatest crime/gangster films ever made, Martin Scorsese’s classic Goodfellas gets a welcome reissue in a new digital restoration. It tells the true story of Henry Hill (Ray Liotta), who as a boy idolised gangsters and wanted nothing more than to become one.

He falls in with the local organisation, making friends with the outwardly charming ‘Jimmy the Gent’ (Robert De Niro) and Tommy DeVito (Joe Pesci), whose volcanic temper frequently leads to extreme violence. As Henry rises through the ranks, he meets and marries Karen (Lorraine Bracco), who is seduced as much by the lifestyle as by the man.

However, Henry’s life of crime eventually catches up with him, and he must find a way to protect himself and his family. Frenetic, funny, and violent, this is Scorsese at his absolute best.

Tomato based, onions, celery, “not too many onions” and clams

Sicilian Risotto from the Old Country