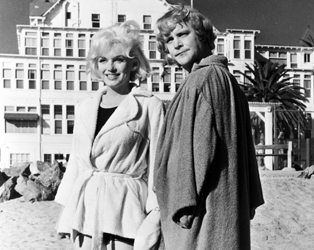 Our monthly choice of a film followed by a specially created main course is the 18.30 screening of Billy Wilder’s Some Like It Hot on Wednesday 7th. The menu will include a choice of Philly Cheese Steak with Sweet Potato Fries, New England Clam Chowder, or Waldorf Salad. Tickets cost €20, free list suspended.

Regularly voted the greatest comedy of all time, Some Like It Hot is here presented in a new 4K digital restoration. Jazz musicians Joe (Tony Curtis) and Jerry (Jack Lemmon) are forced to flee Prohibition-era Chicago after witnessing a mobster boss take murderous revenge on an informant. Disguising themselves as Josephine and Daphne, they mix in with a female band taking the train to Miami. The two become infatuated with group member Sugar Kane (the utterly luminous Marilyn Monroe), struggling to find ways to win her heart while keeping their cover. Matters are complicated by an aging millionaire’s pursuit of Daphne, and the arrival of the mob boss to the city. Despite a troubled production, due in no small part to the difficulties of Monroe’s personal life, the film is, according to Roger Ebert, “one of the enduring treasures of the movies.”