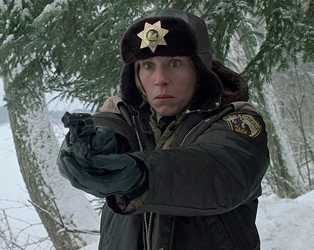 The screening was introduced by writer and film critic Esther McCarthy.

Although previous films such as Miller’s Crossing (1990) and Barton Fink (1991) had received critical acclaim, it wasn’t until Fargo that the Coen Brothers managed to break into the mainstream, achieving commercial success without sacrificing any of their sensibility.

The story of a fake kidnapping gone catastrophically wrong, it largely endeared itself to audiences with the character of Marge Gunderson, the heavily pregnant police chief looking to get to the bottom of events, as portrayed by Frances McDormand, who won any number of
awards for the role, including the Oscar for Best Actress. Fargo has gone on to inspire a successful TV show and a suitably idiosyncratic homage in David Zellner’s underseen film Kumiko, The Treasure Hunter (2014).