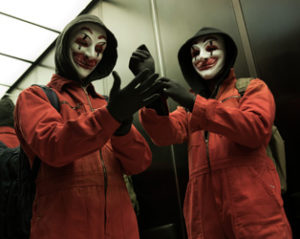 Benjamin is an underdog who mainly lives in his virtual reality as a hacker. When he meets Max, a charismatic boy who belongs to a hacker group called CLAY (Clowns Lauching At You) he finally gets the chance to use his talents systematically. CLAY doesn’t necessarily follow a certain political aim with its hacker attacks but mainly wants to have fun and draw attention. Popularity in the digital world increases and the group is willing to take even bigger risks to keep themselves in the centre of attention – until suddenly German Federal Office of Criminal Investigation eyes their doings. And Benjamin becomes the most wanted hacker in the world.

The screening will be followed by a panel discussion with Renate Samson, Chief Executive of Big Brother Watch (London), Una Mullally, journalist and columnist with The Irish Times, and William McLoughlin from TOG Dublin Hackerspace.

We are also screening The Conversation on Saturday April 1st.