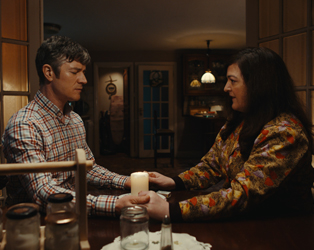 This film was released on Friday 13th September 2019 and is no longer screening.

Following in the tradition of Flann O’Brien, Kevin McAleer, and Father Ted, Extra Ordinary views rural Irish life through a surreal comic lens. Lonely driving instructor Rose Dooley (Maeve Higgins), believing herself responsible for the death of her paranormal investigator father, has turned her back on her ability to communicate with the dead. However, she finds herself inclined to help attractive widower Martin Martin (Barry Ward), whose wife hasn’t let death make her any less domineering. Matters become urgent when local one-hit wonder Christian Winter (Will Forte) believes Martin’s daughter will make the perfect sacrifice to a demon who will revive his music career. With performances of great warmth from Higgins and Ward, Extra Ordinary is a sweet and very funny comedy, with an eye for detail that adds to both the humour and charm of this hugely enjoyable film.