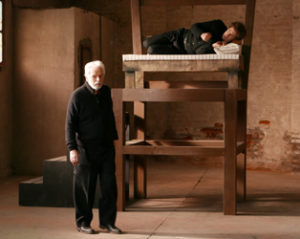 This film was released on Friday 6th January 2017 and is no longer screening.

A sequel to The Dance of Reality (2013) in which Jodorowsky painted a vivid account of his childhood, Endless Poetry picks up where the former left off with the adolescent, erudite Alejandro living in Santiago with his mother, who speaks in song, and the merchant father he despises. Refusing to follow orders to study medicine, a teenage Alejandro abandons his family in a demented, tree-axing rage and moves in with a group of artists who at once appreciate his creative talent.

As in The Dance of Reality, Jodorowsky himself appears at intervals, offering his younger self, (played beautifully by his son Adanowsky), words of wisdom and spiritual guidance. Highly praised when it premiered at Cannes this year, this film, shot by Christopher Doyle, while more introspective and poignant than his hugely influential earlier work – El Topo, Holy Mounatin – nevertheless boasts the same spectacular flair for the absurd and carnivalesque.