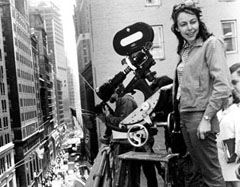 If you are unfamiliar with the work of Elaine May, a search online will throw up videos of speeches the 84-year-old Oscar-nominated writer, director, actor and comedian has made in recent years at events paying tribute to the lifetime achievements of some major Hollywood figures.  These speeches are irreverent, wildly inventive and hysterically funny – the audiences consistently tear up with laughter – and quickly you find yourself asking, ‘why aren’t they honouring her?’

Starting out in the 1950s as a comedian who formed one half of an immensely successful duo with Mike Nichols, May then turned to acting and writing before assuming the role of director for the first time on A New Leaf (1971), one of cinema’s great comedies, released 45 years ago which she also scripted and starred in.

This film revealed the unique authorial voice and ingenious, daring wit common to all four works May directed, projects that nearly all involved a considerable degree of conflict with studios, particularly over swelling budgets and final cuts.  These disputes, as well as May’s own elusiveness, have, for too long obscured her talent as a filmmaker, talent which is now at last being honoured with screenings of Mikey and Nicky at MoMA last year, of The Heartbreak Kid at Anthology Film Archives in February, of anniversary screenings of A New Leaf taking place at multiple international venues and festivals this year and a Laurel Award for Screenwriting Achievement from the Writers Guild of America in January.  We too would like to pay tribute with these four screenings of her inimitable work.