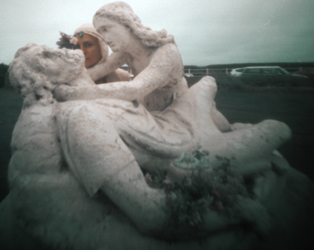 In 2016, filmmaker Andrew Kötting set out on a unique journey. Along with several collaborators including writer Iain Sinclair, singer Claudia Barton and visual artist Anonymous Bosch, he set out to retrace the steps of Edith Swan-neck, who is said to have identified the remains of her beloved King Harold in the wake of the Battle of Hastings in 1066.

Almost 1000 years on, the troupe set out to walk 108 miles from Waltham Abbey in Essex to St Leonards-on-Sea in East Sussex, where a statue lies today depicting Harold in the arms of Edith. The journey was captured in the film Edith Walks (which screens at the IFI on July 2nd and 3rd 2017) and you can read Kötting’s daily diary from the trip below. 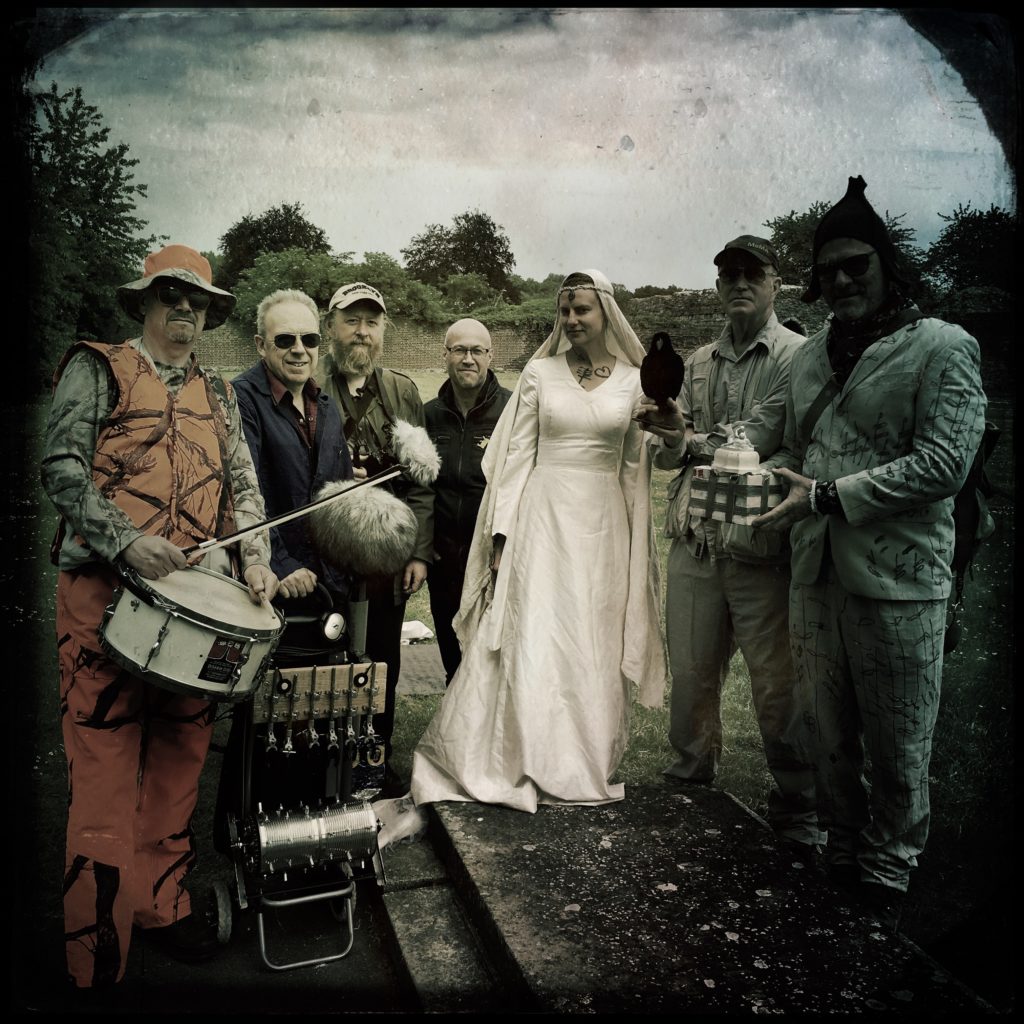 27th May 2016 – Day 1
We gather. A clan. Upon Harold’s slab of buried body parts, apparently. The sun is with us. Greetings exchanged and bodies embraced. We can admire someone only if they are three-quarters irresponsible, admiration has nothing to do with respect. I admire this gaggle of gatherers. In fact I love them all.

Iain, as ever an itch to get started, but first the gargoyles hidden upon the church walls. I morph into one. Felt helmet and flowered suit, a chin that remains too proud and lips that cower into the mouth of time.

Any success, in any realm, involves an inner impoverishment. It makes us forget what we are, it deprives us of the torments of our limits. And for this we are eternally grateful. Let the torment begin. We each have our own fictions to tread. Riverside abodes, a busy road and the Lea Valley as company.

A minimum of silliness is essential for everything, for affirming and even for denying. 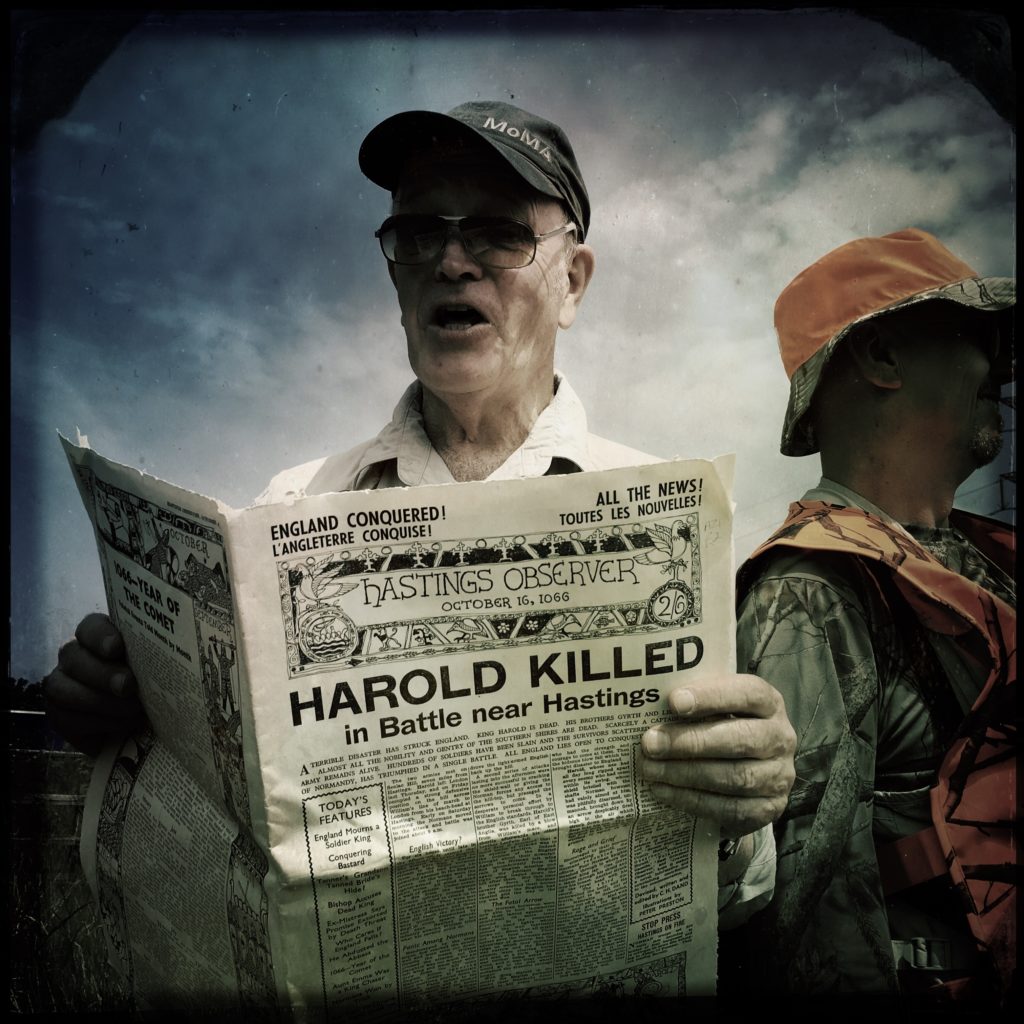 28th May – Day 2
Again we gather, this time where we left off last night. Suffering opens our eyes, helps us see what we could not have seen otherwise.

The drum beats in the new day. Iain is in the wrong hat, he looks elderly but as ever takes off sprightly. Tourists abound as we wend our merry way. We process as both spectacle and obstacle.

Prejudice is an organic truth, false in itself but accumulated by the generations and transmitted with impunity. Monotheistic belief systems, believing in themselves above all others. The heathens are back amongst us.

I embrace my interlopers and collaborators, they are here with me today and I love them. The heights of despair and the temptation to exist often arriving in equal measure with the noise of the A21 as deafening sounding board. 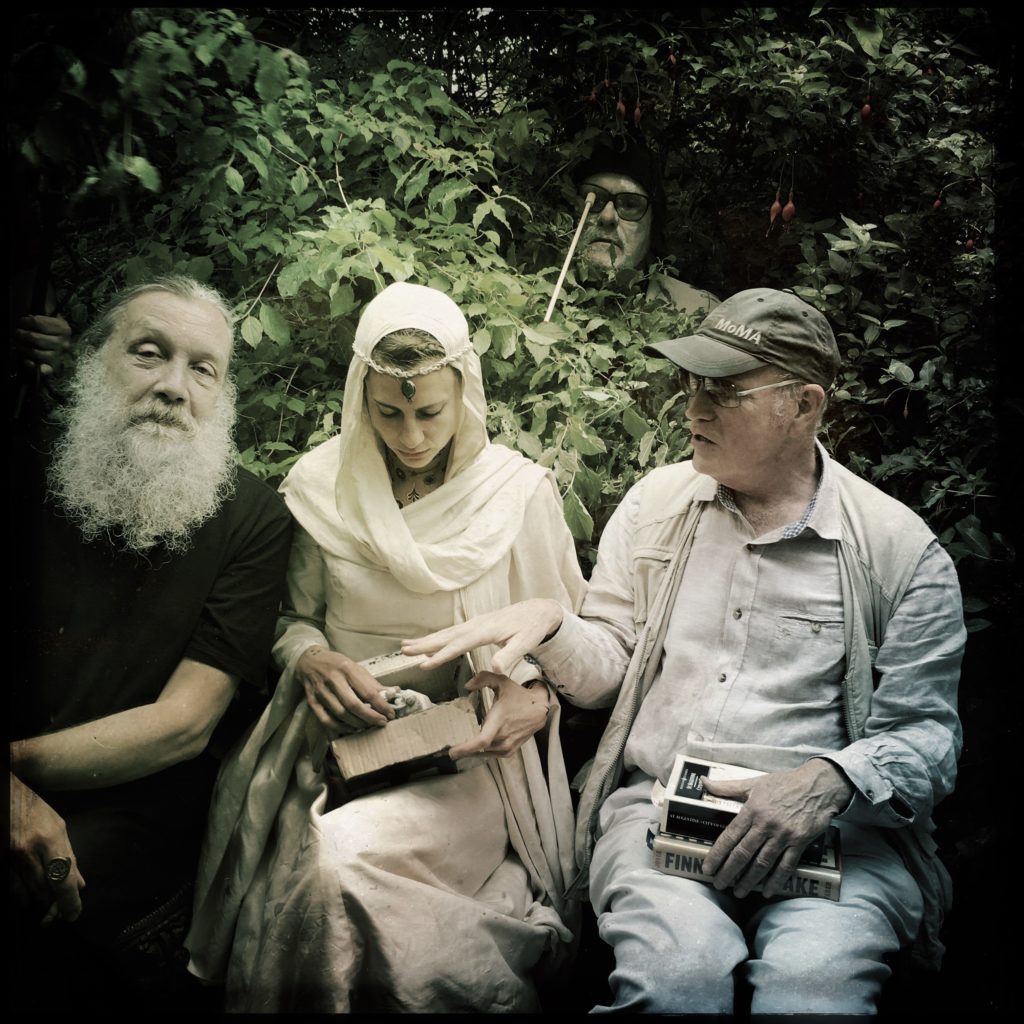 29th May – Day 3
The clear-sighted person who understands himself, explains himself, justifies himself and dominates his actions will never make a memorable gesture. Psychology is the hero’s grave, so we push on towards Pratt’s Bottom, from Oh Happy Days, this late May daze, a haze. Jem is back amongst us, his noise clattering towards the other Pilgrim’s way.

The sun sets and the rhythm re-news, we stumble into Tonbridge, Anonymous Bosch has taken the reins, but for him too, even as an ancient inhabitant, all is discombobulation. He seems lost. I realise that we must be in a state of permanent physical weakness for words to touch us, for them to insinuate themselves into us and thereafter the beginnings of a sort of career. 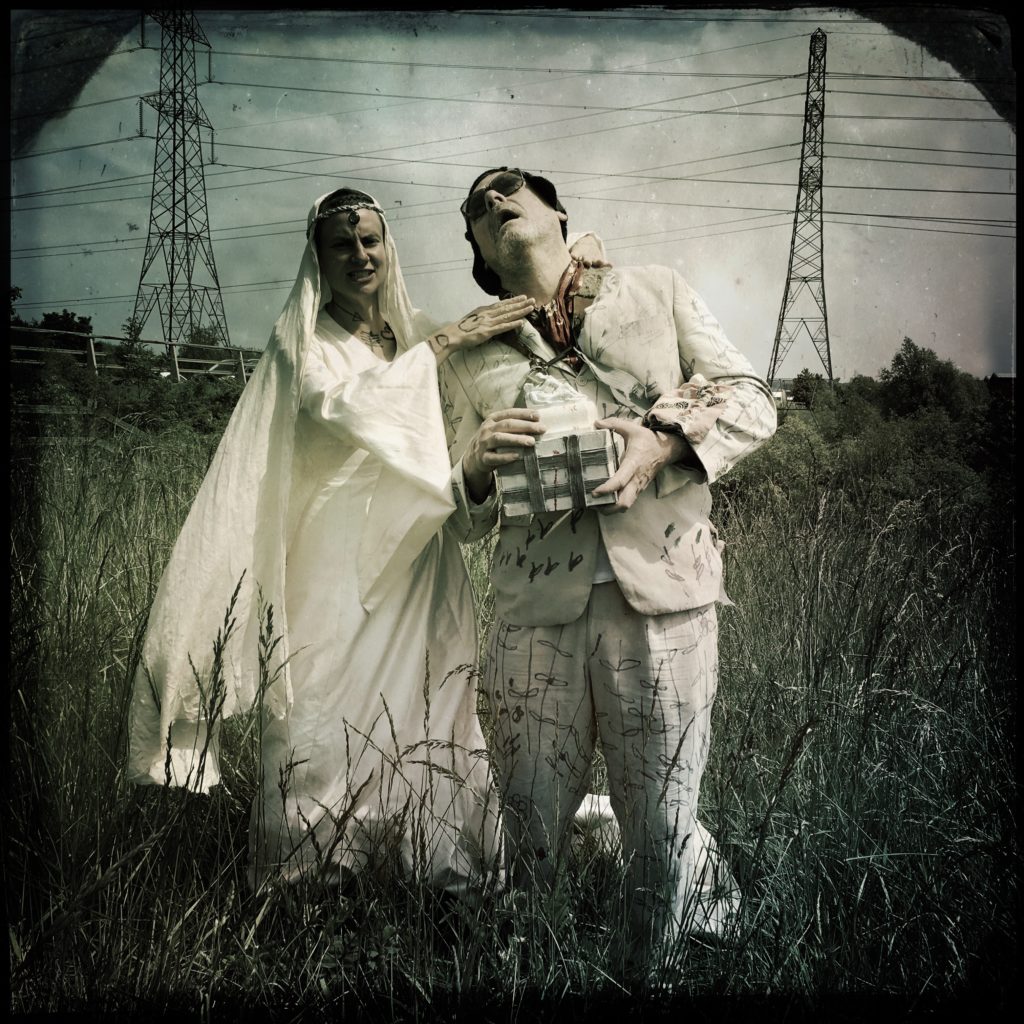 30th May – Day 4
Tonbridge Castle, Tonbridge not Tunbridge Wells, we’ll be there eventually but avoiding roads and flying like the crows we get lost a little too quickly.

It is who you walk with that matters and the depth of passion is measured by the low feelings it involves. Feelings that guarantee an intensity and a continuance. Melancholy feeds on itself and that is why it cannot renew itself, I love it, it makes me happy. Onwards we go, ever onwards.

Iain has been carrying a black-as-black-crow-decoy from the getgo but it is only now that Jem seduces him with the power of a modern mobile; snippets of Captain Beefheart’s last studio album (googled on my own phone), hang all tinny twitter in the air. The crow is Odo, bishop of Bayeux, I like to call him Oboe and I’m sure that it was Iain who told me (amongst many other things) that during the Second World War Heinrich Himmler coveted the tapestry, regarding it as important for the glorious and cultured Germanic history as everything else they’d plundered. 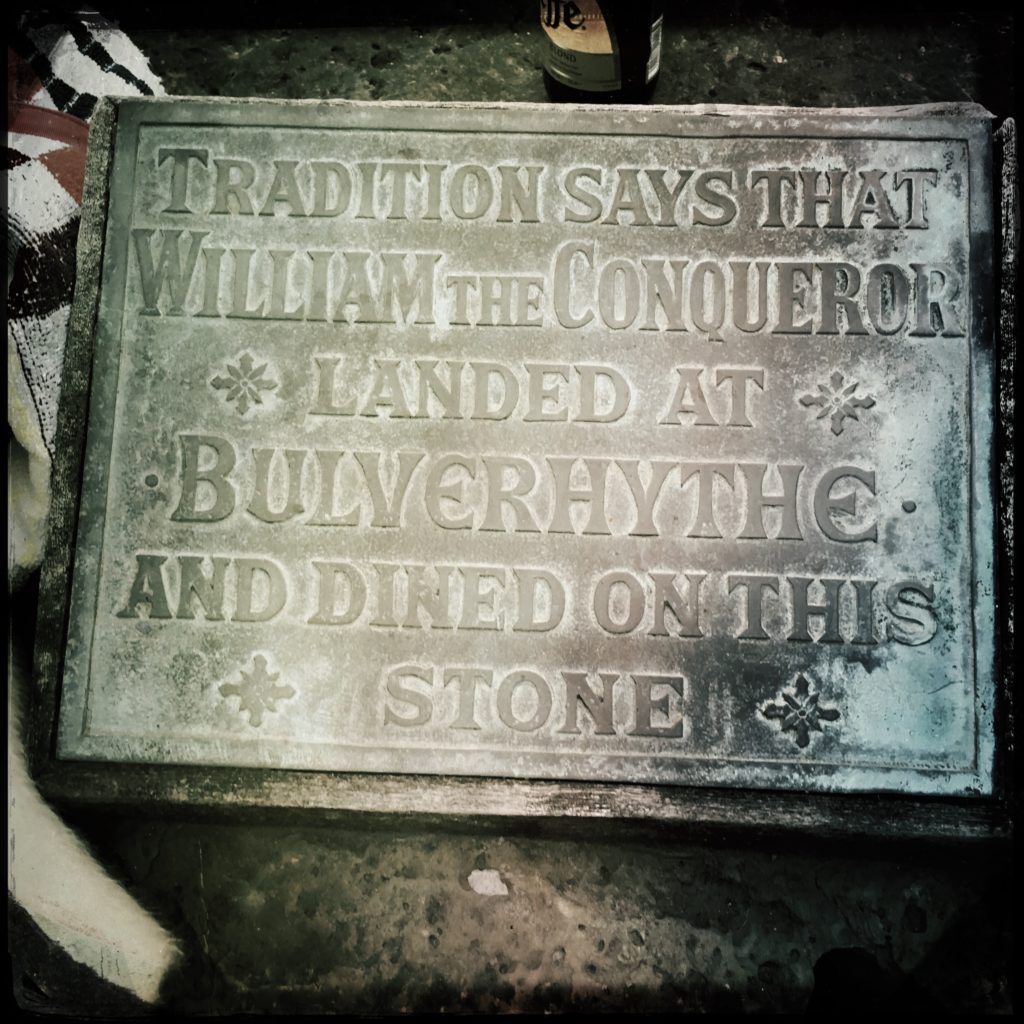 31st May – Day 5
Our sound travels freely through the air, disrespecting all physical or social boundaries, incapable of being easily contained. It is a simple yet effective way for our rag-taggle culture to impose itself upon all others. It emanates from us as we process through the upper middle class commuter belt of the South East.

We are beyond the hop-pickers and farmers and at once conceptualists, theorists and situationists, logicians, mathematicians, planners, schemers and dreamers but above all we are noise-makers.

We march upon The High Street and into Battle. It is busy with foreign students, tacticians, enthusiasts and Japanese tourists. At Jempson’s tea-rooms we sup on tea and cakes; it’s a good place to rest and pester the staff. We must have been making a right racket, because crowds have gathered to inspect the cacophonous entourage. It’s a privilege to be amongst such company. But ever the fall, I phone up The Abbey in an attempt to gain access to Harold’s Tomb.

The conversation opens up a bureaucratic can of negative worms.

We are left to flounder around in the gift shop, advised by the powers-that-be that we have to ignore our proposed destination and Brexit by the backdoor. Prevented we move on, walking tall and beating the bounds of the grounds all the way to Grosvenor Gardens.

We can smell the sea, we are running.

Ps The novel is dead. Long live the antinovel, built from scraps of ‘real-life’ experience. 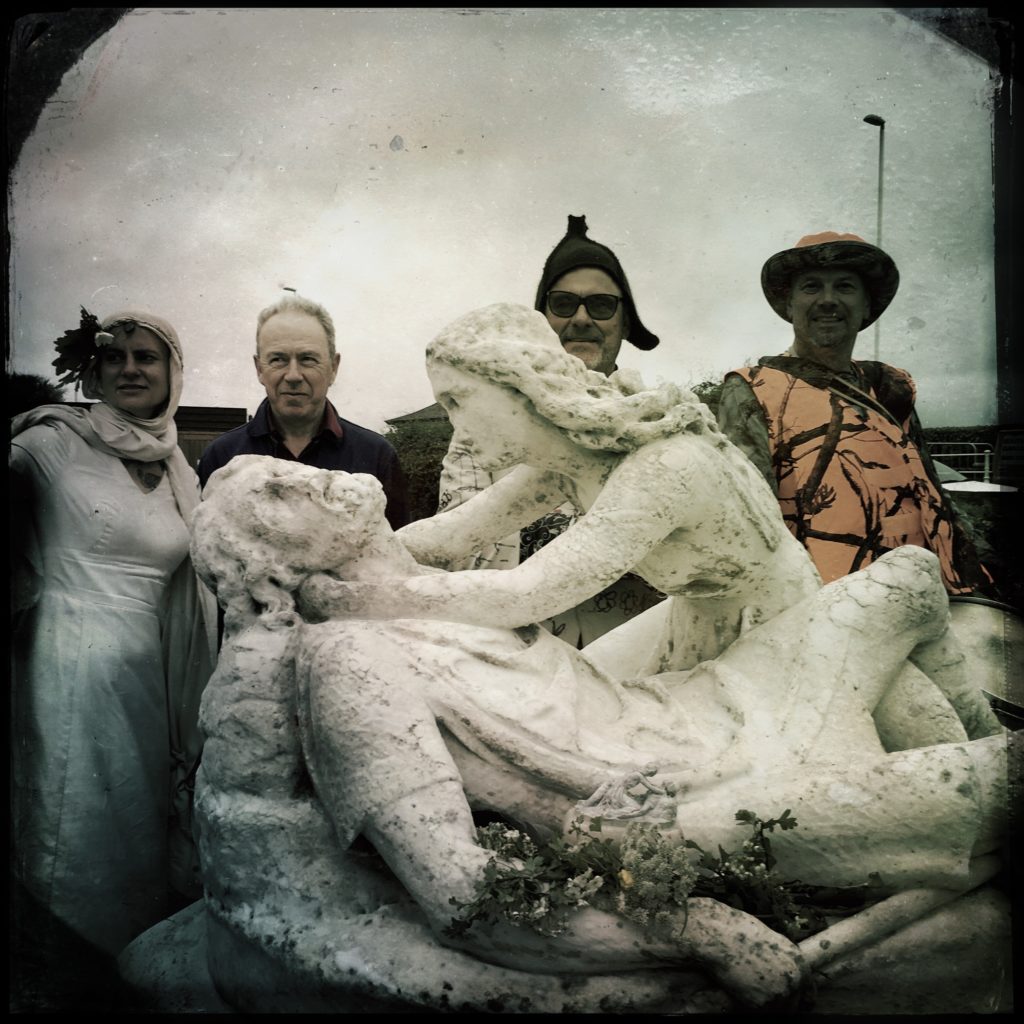 Get your tickets for our special screenings of Edith Walks (+ animation Forgotten The Queen) for Sunday 2nd July at 16.00 or Monday 3rd July at 18.20.