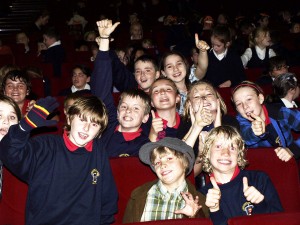 We are delighted to publish the report of our action research project on media usage among 12-13 year olds. The Project, supported by the BAI, comprised surveys and media literacy interventions in Dublin and at venues around the country. Among the findings was further confirmation that young people are adept in media usage, but also that they are highly motivated by it. Read More

One of the most exciting developments of the new Junior Cycle is the designation of a number of short courses as part of students’ overall assessment. We are delighted to partner with FĺS Film in Schools and Fresh Film Festival to develop a short course in Film that will comprise skills of watching, making and showing, informed by media literacy as key skill. During the 2013/14 school year we will develop the course in conjunction with a small number of schools, trying out different approaches and activities.

The Film Focus report, published in 2012, featured the findings of our two-year action research project which was carried out with the support of the Irish Film Board/Bord Scannán na hÉireann. Setting out to define a national strategy for film education and young people, we ended up with a whole range of activities that combined film education and media literacy with collaborative learning and critical thinking. Among our recommendations was a commitment to develop a Short Course for Junior Cycle and to continue to explore avenues for media literacy across the formal and informal education sectors. Read More