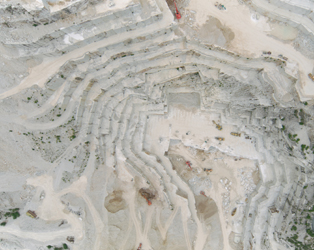 The screening was introduced by Professor Pat Brereton, School of Communications, DCU, and was presented in association with the Art in the Anthropocene Conference at Trinity College Dublin.

Several billion tons of earth are moved by humans every year, using spades, excavators, drills or dynamite. In Earth, director Nikolaus Geyrhalter observes people in mines, quarries and at large construction sites, engaged in a constant quest to subjugate the planet and appropriate its resources.

Geyrhalter travels to Germany, Italy, Hungary, Spain, Canada and the United States to see the damage inflicted on landscapes by large-scale
engineering and mining projects. The film shows the abstract choreography of the mechanical processes in action alongside testimonies from the workers and technicians involved.