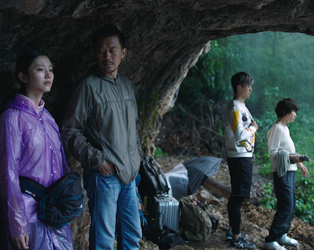 Wang Zhun, a filmmaker living in Shanghai, travels to the Wu Mountain in southwest China to track down the traditional folk song The Tale of Darkness to inspire his script. Performed only at funerals, this ‘nocturnal song’ is regarded as a ‘living epic’, depicting the origins of heaven and the earth, creation and reproduction cycles, a grandiose portrayal of the Han people.

But when the urban filmmaker and his crew get lost in the mountains, they must hike and stay with locals. Relationships are strained and Wang Zhun’s anxious, emotional nature is put to the test. Chinese writer-filmmaker Zhang Ming follows the characters spectre-like, in their moments of trial and isolation. A slow-burning journey into the process of creativity, filmmaking, politics, where urban and rural cultures clash.