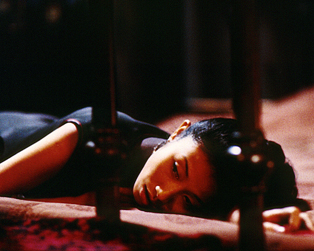 A remake of Fei Mu’s 1948 classic (widely considered as the greatest Chinese film ever made), Tian Zhuangzhuang’s Springtime in a Small Town is an intimate account of a love triangle. Set in 1946 in rural southern China between the end of Japanese wartime occupation and the Communist takeover, Yuwen and her husband Dai Liyan live in the ruins of a large rural mansion. When Shanghai doctor Zhang Zhichen comes to visit his old friend Liyan, he discovers Yuwen to be the woman with whom he had been in love ten years earlier. Mark Lee’s mesmerising photography shot under extreme low-light combines with Timmy Yip’s (Crouching Tiger, Hidden Dragon) production design to create a haunting, nostalgic and sensual melodrama.