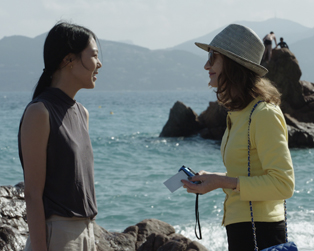 Prolific Korean director Hong Sang-Soo’s cheerful and melancholic character study Claire’s Camera, filmed over 5 days during the 2016 Cannes Film Festival is a reverential bow to the late Eric Rohmer who directed Claire’s Knee (amongst many others).

Music teacher Claire (Isabelle Huppert), with her ever present Polaroid camera arrives in Cannes where her best friend is premiering a film. She strikes up a conversation with Manhee (Kim Min-Hee, On the Beach at Night Alone) a Korean film sales assistant who mysteriously has just been fired by her boss. A chain of events, conversations and chance encounters with strangers, all triggered by Claire’s photos slowly reveals a backstory which on the surface seemed deceptively unremarkable. Calmly observed by Sang-Soo’s static camera and glittering performances.