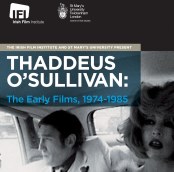 The two-disc, digitally remastered DVD features five films that O’Sullivan made between 1974 and 1985 including the BAFTA nominated The Woman Who Married Clark Gable (1985) and a rarely shown film on Jack B. Yeats (1981), as well as authoritative versions of his RCA and BFI work from the 1970s.

These early films launched a career which later included features December Bride, Ordinary Decent Criminal and Stella Days, and television work that includes Amber and the Emmy Award-winning Into the Storm/Churchill at War. Working regularly in Ireland and England he occupies a tantalising position between his native and adopted cultures, existing as he once termed it, “in the crack between [British and Irish] cultures.”

O’Sullivan established his career in London, so it was highly appropriate for the IFI who preserve the films in the IFI Irish Film Archive to team up with Lance Pettitt at the Centre for Irish Studies, St Mary’s University in London, who carried out the research underpinning this new curation.

Professor Pettitt said: “I’m delighted to have collaborated with the IFI. The DVD gives a golden opportunity to people who might be familiar with Thaddeus’ more recent screen work or know him by reputation, to explore his stylistic development during an experimental period of his career”.

Kasandra O’Connell, Head of the IFI Irish Film Archive added: “We feel the appeal of these remarkable films reaches beyond academic audiences and that they will be of significance to anyone interested in brave and creative filmmaking by one of Ireland’s foremost directors”.